Coffee weather is here! Time for football again, and the night locusts are squealing... Morning mists quietly meld the Summer's scorcher sun with its cozy Harvest counterpart. With a glance toward the huge tote in the corner, I am enjoying the thought of carefully placing some Autumnal accent pieces... Labor Day weekend, the official end of Summer.
I hope you enjoy the cooler days and chill in the nights. My favorite time of the year. 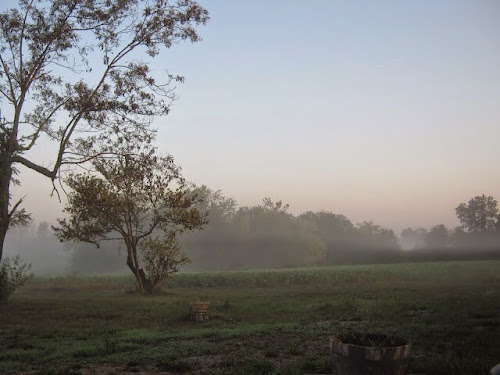 A dear friend reminded me today how long it has been since I last posted... I was surprised to see ten days have passed. Busy ones, I hope... Productive, I wish... Who am I fooling? Ten days filled with ... This and that, multi-directional thrusts that poke holes in the gentle ambiance of a life...

Even though we have recently had some of our warmest ! (Hot) days, it's clear we near the crisp Autumn days... Crickets do their chirpier songs, and wild creatures along the perimeter howl and scramble through the night. A beautiful owl always perches in a scrub of locust right outside my door, a sad little remnant left after some storm.

I think my son posted this on Facebook quite a while ago. Excellent advice. 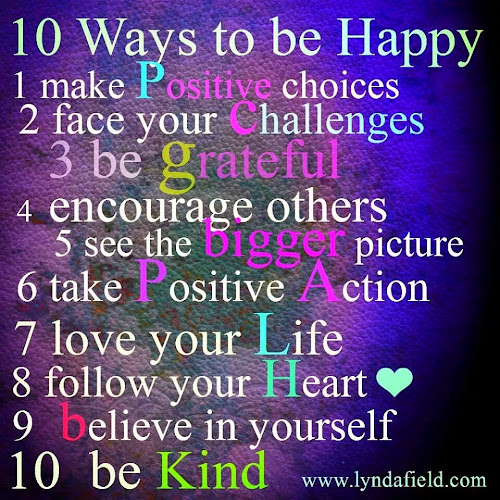 Have a lovely Labor Day...

Had to share this shot! It's not mine...probably Pinterest, but I found it wandering on Facebook! I would love to do this for a teacher brunch... Or for some kind of sewing party.. Or house building? I dunno. Maybe I'm just hungry for long johns. Not my usual "poison" but, hey... Maybe that's how many inches one of them adds to the hips... Ugh. 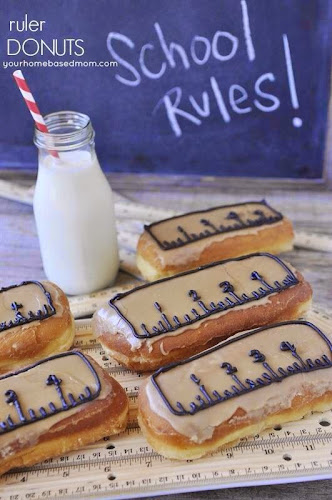 I really didn't have much to add... Much on my to-do list... Little on my done... Isn't it funny how some days are sooo productive... And I can't really imagine how (or why) I got so much done. Others are... Less. I really, really work, write, think, feel better at night. Maybe even alone. I was an only child in the country. Mom and Dad were busy, happy, doer-type parents. I got left to my own resources... And I then evolved to a single mom with a house full of happy boys...(only one of them mine, but having good times...). I'm super annoying (especially to myself) when I overthink and analyze. It is what it is. 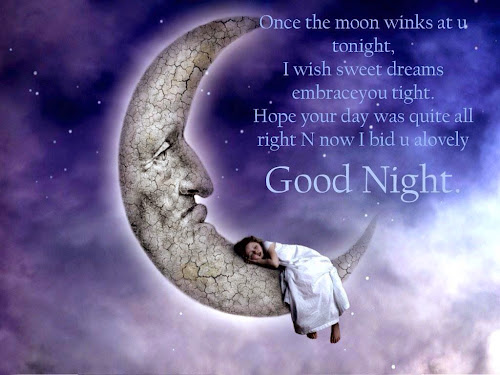 So, today was the first local day of classes... I missed it fiercely.... Missed the excitement, the new clothes... The orientation of new beginnings... Six little classes...groups to be a bonded entity, for better or for worse through all the days of the year... About a hundred spirits touching mine daily. Such loneliness I don't like. 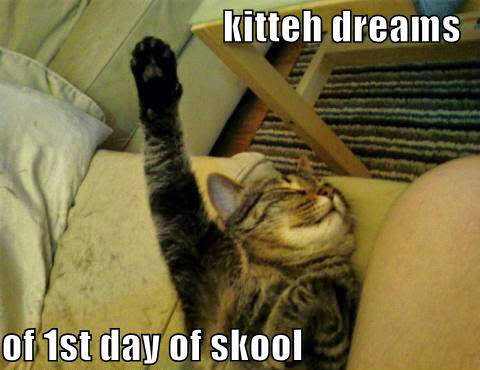 So I leave you with my kitty... And a favorite Robert Frost poem... About working alone... Or in conjunction with the brotherhood of man... Good old Robert....

A Tuft of Flowers
By Robert Frost
I went to turn the grass once after one
Who mowed it in the dew before the sun.
The dew was gone that made his blade so keen
Before I came to view the levelled scene.
I looked for him behind an isle of trees;
I listened for his whetstone on the breeze.
But he had gone his way, the grass all mown,
And I must be, as he had been,--alone,
`As all must be,' I said within my heart,
`Whether they work together or apart.'
But as I said it, swift there passed me by
On noiseless wing a 'wildered butterfly,
Seeking with memories grown dim o'er night
Some resting flower of yesterday's delight.
And once I marked his flight go round and round,
As where some flower lay withering on the ground.
And then he flew as far as eye could see,
And then on tremulous wing came back to me.
I thought of questions that have no reply,
And would have turned to toss the grass to dry;
But he turned first, and led my eye to look
At a tall tuft of flowers beside a brook,
A leaping tongue of bloom the scythe had spared
Beside a reedy brook the scythe had bared.
I left my place to know them by their name,
Finding them butterfly weed when I came.
The mower in the dew had loved them thus,
By leaving them to flourish, not for us,
Nor yet to draw one thought of ours to him.
But from sheer morning gladness at the brim.
The butterfly and I had lit upon,
Nevertheless, a message from the dawn,
That made me hear the wakening birds around,
And hear his long scythe whispering to the ground,
And feel a spirit kindred to my own;
So that henceforth I worked no more alone;
But glad with him, I worked as with his aid,
And weary, sought at noon with him the shade;
And dreaming, as it were, held brotherly speech
With one whose thought I had not hoped to reach.
`Men work together,' I told him from the heart,
`Whether they work together or apart.'

I have written before of my love affair with Chocolat. No, not the confection, although that is, indeed, very wonderful! But the movie with Juliette Binoche. I love, love, love that movie, and I have made no secret about trying to "own or capture" it as many ways as possible. I guess you might say I collect Chocolat...
So, I own the DVD... I had to purchase two CDs because I broke my original on a cold January day... Did you know CDs became more fragile when they are below zero? I have the VCR... I bought the movie on iTunes, it's on my iPad at all times... And my iPod... Yep. Money wasted in part... I believe it all can be traced to the time I fell in love with a little French town.... In Chocolat. I inhaled Vianne in one wild transfusion... Voila! The metamorphosis was complete. I am Vianne...... ( without all the figure to die for, beautiful dark curls, high heels and tight sweaters, captivating Irish pirate vagabond... Baggage!) 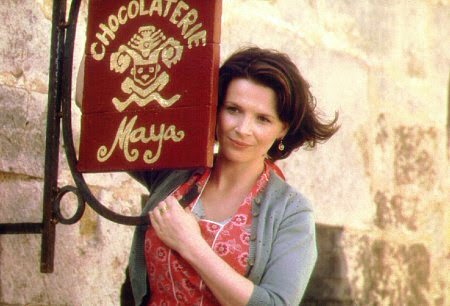 Actually, my spirit is the problem! I crave to be Vianne.... I don't even care about the Johnny Depp part. I just love her vivacious spirit, her wisdom with her comments, the energy and elan of that little shop.... I want that. I want to come into something that's all dirty and unloved and turn it into a shop of magical, soothing elixirs.... or bits of "ephemera" that speak to the soul--- I want that. I want to read people and magically give them a bit of something delicious I made that will fix their lives.. 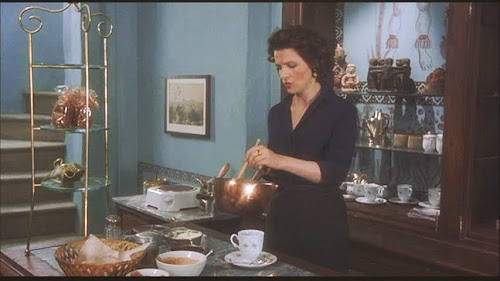 As I've told you before, I saw this movie at least six times when it was released at the little movie theater in Moberly. I saw it all alone.... Well, others were there, but I went alone. After the first time, I took gold wrapped chocolates to every show and gave them to everyone before the movie. Got a lot of weird stares!!! I love the music.... It's almost all I play in the car any more. 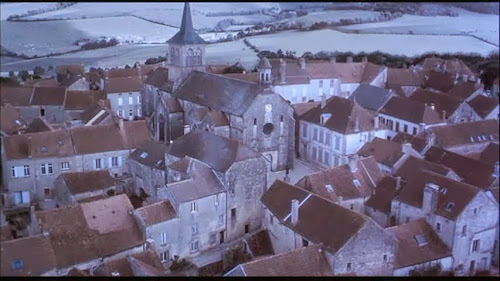 I have watched Chocolat at home probably way more than 100 times. It soothes my soul; the music cheers me; the effervescence of Vianne inspires; the singleness cheers; the happy twist of finding Anouk safe after the angst of the explosion at the River Docks delights; the quirkiness tickles me... When I've had to recover from melancholy over my life choices...( and who hasn't?), I often turn it on at night and go to sleep with it.... Ah, the DVD experience to awaken to the repeat pattern of the opening choice screen...


One might say that I'm obsessed! This movie alone sparked my love of French things... Decor, clothing... I had a French theme in my room at school for years... Which always generated some young thing to say... "But you teach Spanish?!?!?!" Indeed. 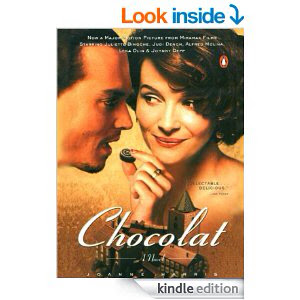 Of course, I read the book.... I LIKED IT, BUT I PREFERRED THE CHARACTERS THE WAY THEY WERE IN THE MOVIE. Sorry, Joanne Harris, but I liked it the way you or whoever wrote the screenplay.... However, Harris did create Vianne. Harris is a very readable, captivating author.... So imagine my surprise tonight. My Sweetie tells me that This adored movie is available for free on Amazon Prime streaming video.... Yay! I love that! I don't always have it handy enough... Nothing like putting it on to inspire me to clean...to stir up hot cocoa with a dash of cayenne... Or to be more outgoing and my own person....    (-----------update: on second reading, I Love! The book...  Still prefer the plot/characters in Juliette's movie, but really click with the author's style and caliber of writing...----)

Then, what did I see...news in fact? What? Joanne Harris has THREE books with my Vianne as the main character. .????? All available on Kindle... With me sitting here wishing WISHING W.I.S.H.I.N.G.... FOR something captivating to replace the little ache I feel for missing school..... 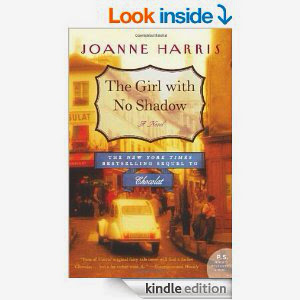 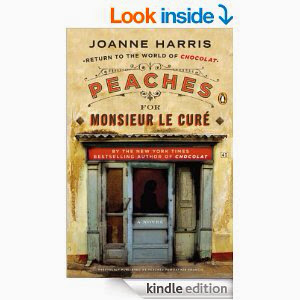 It is that misty-morning, spider web in the garden, cicada singing time of summer. In my town the Homecoming with all its rides, Nashville shows, contests, and visiting heralds the highlight and the end of summer. Recently, teachers get only a few more days before they convene in workshops. Most have already jazzed up their rooms, bulletin boards... Ready for the optimistic excitement that is the first day of school. 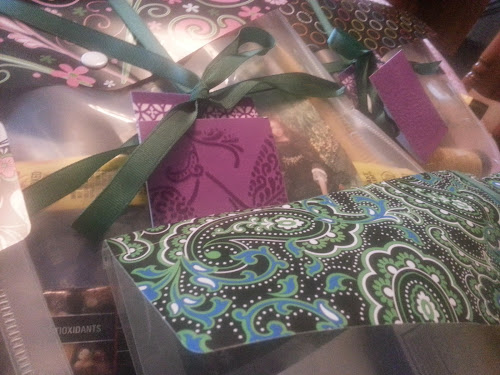 I avoided thinking of it last summer, thinking I could avoid the pang of not returning to a classroom. My former principal, a kind gentleman, tells me, "It passes." And the wish to be in the thick of a room full of teens does wane a lot when I consider the icy roads, the early mornings... The exhaustion... I'm good. I'm exactly where I need to be. 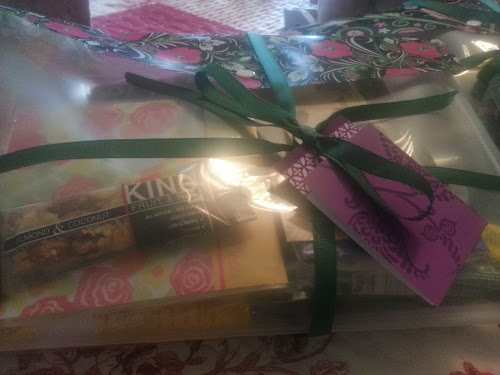 It's going to always be this way... As odd as it seems, I realize I seem old to my young teacher friends. I had older teacher mentors who retired... And then they... ??? I'm not sure! That's my job. I'm in charge of doing something! To my young friends, former colleagues: "Godspeed!" I wish you all a truly wonderful year! I hope these little gifts warm your hearts as much as they did mine while I was thinking of you! 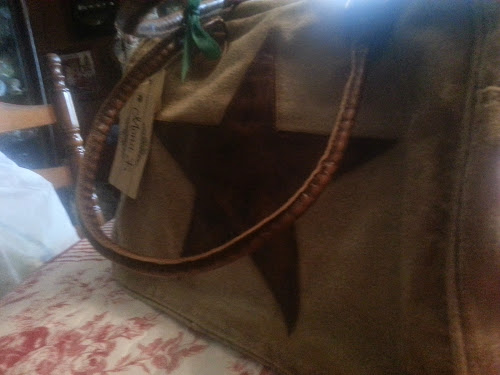 I have had so many good days in the classroom. Thinking about how much these students' young minds need to be touched... How to excite them, encourage... Inspire. It's not always what I did... But luckily, I never lost my love of young people. I see so many of my former "kiddos." How rewarding. 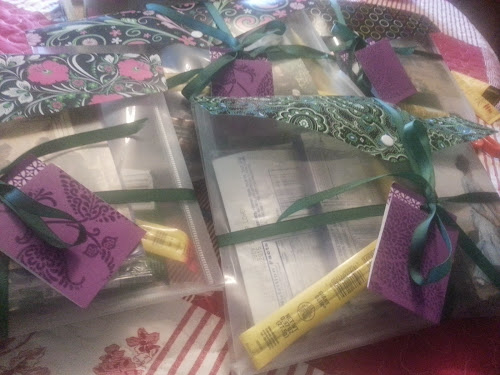 So... With Payless and Walmart, Target, and Others screaming out those Back-to-School ads... I happily make other plans. Retirement is good. It is. 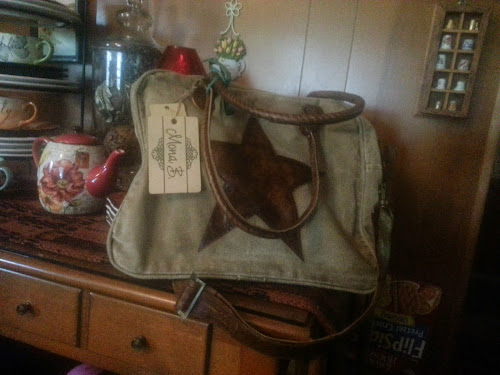 To Sundays... Filled with family, love, prayers, and hope. 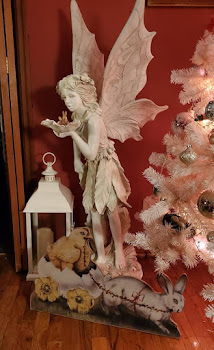